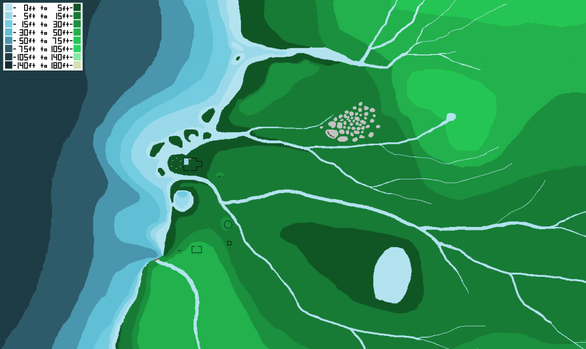 The words headspace and innerworld (though there are other words sometimes used by other multiple systems) are often used to be describe an internal landscape within which the residents of a system can see and interact with each other. This innerworld is often a three dimensional space within the mind of a system which can range widely in size depending upon the system. What these internal landscapes look and act like varies from system to system. Plus some systems don’t have one.

A section of the sea that has been explored has a kelp forest. Its not huge, but does stretch on for some distance. We have yet to discern what species of kelp makes up the underwater forest. The kelp grows from a mostly rocky ground up to near the surface. In places the kelp is especially dense in some places.

Going westward is a fairly large coral reef shadows a fair lot of the coast in our innerworld. Its found some ways down and some distance from shore. Within the reef there are countless nooks and crannies everywhere.

Between the reef and the shore is a grouping are several very small island-like masses of land. These low little islands are actually what remains of when the sea was a bit farther away and the ruins bigger when we were kids. One of the islands closest to the Ruins even has a number of large stones and some remains of a stone floor on it.

Between these small islands and the shore, the water is very shallow. The bottom is mostly sandy with some plant life. Right on shore just a bit further west is the Ruins.

The Ruins are made-up of stone heavily covered in moss and other plant-life. The Ruins primary focus is a large room with a large archway entrance on the South wall. On the North side of the room is a stone table/altar, while at the center is a fire pit, near the southern corner a stairway leading down to various underground rooms, and taking up the northwestern portion of the room is a step-down pool. Near the southwestern corner is a wide stairway leading down which leads into a hallway with several rooms. The rooms are set-up and decorated for use of the various spiritual beliefs held by various members of them system. On the western wall is an openness completely showing all of a far smaller room that has walls but no ceiling with the space almost completely taken-up by a massive oak (which is Darahagh). On the eastern wall is another archway but the once room there is little more than a vague outline of a few stones in the ground plus a standing stone circle consisting of six tall and narrow stones now take up the space of the once room.

Just a bit a ways to the west of the Ruins is a den coming out rise of the land. The den is Miushra’s Den. It has only a simple very short tunnel that is just big enough for a cheetah-sized feline to walk through only slightly crouched. It ends into a chamber just big enough for her stand and comfortably turn around in.

Not going too far south one comes across a stream heading to the sea having come from several smaller streams in the wilderness. Farther upstream it is easy enough for most larger animals to simply jump over and very shadow for those that could not, and near the mouth of the stream into the sea it is wider. Roughly inline with the entrance to the Ruins is a simple stone arched bridge.

Across the stream and some ways away but still following the shore is a very small cove. The line between sea and cove is shallower than the cove’s deeper parts. What the cove contains is the entrance to Aquasarius’s Hole. That being a small cave-like hole on the northern side of the cove which was almost completely submerged. It is a single chamber hollow large enough for Aquasarius to lay curled up in comfortably and cave floor is covered in a pile of colorful and smooth stones.

Beyond the small cove, the earth begins the slope of a hill which has its side facing the sea cut off leaving a cliff. The slope is rather gentle with a trail cutting through the trees leading up toward the summit of the hill.

Before reaching the summit and just off the trail going up the hill is the entrance to Arron’s Cave. Arron’s Cave is a simple underground home cutting into the rock. There is no door, just a large opening into a short hallway before turning into the living space which as a large table, kitchen area, fireplace. From there, there is another turn leading into a bedroom area with a natural underground stream opening up.

Further up and almost on top of the hill is Jordan’s Collage. Jordan’s Cottage in a single room home made of stone. His home is furnished with a bed and dresser to one side of the room, a table and chairs with a kitchen area on the other side of the room, and a fireplace centered on the back wall with a chair nearby. The electricity for the cottage comes from a several hydroelectric generators in the stream just behind the cottage.

This stream, which isn’t very large, comes to an end at the edge of the hillside cliff and falls into the ocean as a small waterfall. The ocean below is a bit deeper than normal making it a safe diving spot.

Heading westward through the forest the hill begins to slope down again. Between the end of the hill and another stream (which connects to the one by the Ruins. Is a mound of Earth. The mound is actually Bran’s home, or we jokingly call it, his Bran’s “Hobbit Hole” because of how it happens to be. Unlike Arron’s Cave which looks like a cave made into home, Bran’s Hobbit Hole looks like a home that happens to be underground. Its two story with a wooden interior with the first floor having the kitchen, dinning, and living-like area while the lower “second floor” has the bedroom.

Just south from there and still near the stream still is Holo’s Gazebo. Holo’s Gazebo is a wooden gazebo with no railings and a raised tile floor. All up along the rim of the ceiling are shades which can be lowered in sections. At the center of the gazebo is a bed with a trunk at its base.

Across several small streams to the north is an open meadow. The meadow is very large and is much of it takes up all of a low laying area. The meadow is completely open to the sky with grasses and flowering plants growing everywhere. The most western end of the meadow is taken up by a large pond which is home to some fish.

Northward from there is a collection of large boulders all together. Many are scattered around in various sizes and shapes. One of the most southeastern boulders has an entrance to a cave under its base. Near one odd shaped boulder rests against and nearly top of another boulder creating a large hollow between them off the ground.

Going westward from there, there is a spring. The spring comes out from n underground stream and into a pool layered on the bottom with flat slabs of stone. The spring also connects to a stream which passes the collection of boulders as it makes its way to the sea.

These are just some noteworthy landmarks in the main area of our innerworld.

The climate of our innerworld is mild seasonally with a lot of precipitation throughout the year. Generally, innerworld during the wintertime the temperature tends to average around 40°F/4.5°C more or less throughout much of the winter (though sometimes it does drop down low enough for us it to get a bit of snow for a day or too on rare occasions). While in the summer its average more around 90°F/32°C. Annual precipitation is very high in our innerworld, with some form of precipitation ranging from a light misting to hard rainfall, normally happening at least once or twice a every week without much fail. During the spring and early summer months its not uncommon for it to mist if not actually rain almost every other day for a short period of time due to this the humidity and mild weather, fog isn’t an uncommon sight early in the morning some days. Thunderstorms and sometimes slight flooding are not unheard of either though extreme weather beyond that doesn’t really happen in our innerworld.

The fauna (whom are not headmates mind you) in our innerworld is very diverse. On land, the fauna is mostly those that live in modern North America with some animals which are now extinct (most notably some from the Pleistocene epoch) though none seem to be from anything before the mass extinction of the dinosaurs. Plus, the fauna in our innerworld isn’t from one specific area of North America. The flora on land is a wide mix of many different kinds of plants of many sizes one would see in a modern deciduous forest. The ones we can identify are found somewhere in North America. There is a lot of moss almost everywhere, because of the high amount of rain as well.

Another notable thing about our innerworld is that our sky is different from how the actual sky around our body looks. Inworld the moon is bigger in the sky. Several times larger in appearance than the actual moon. Also the visible stars are in many different patterns. Most notably though, is that there are a few stars in our innerworld which are much brighter in appearance than any actual stars. Between the larger moon and the few brighter stars, the night is a tad bit brighter than a night in the actual physical world around our system’s body.

There is a reality to our innerworld, that we can not ignore or forget. Though this reality is different that the physical laws in the outerworld, they still govern how our innerworld works nonetheless. To us, our innerworld acts like, and we experience it like, a world of its own. We eat, drink, sleep, and so on. We all have to hunt, graze, or scavenge for food less the person goes hungry until they can eat. The same is with drinking and sleeping. We can get hurt and feel pain to of course, and when that happens healing takes time. However, the injuries we do sometimes experience are often very minor and seem to heal rather quickly compared to what similar injury would have actually done. So these are things we live with.